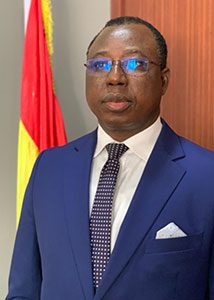 Mr. Joseph Akanjolenur Whittal, Commissioner of the Commission on Human Rights and Administrative Justice (CHRAJ), and Chair of the Governing Council with supervisory oversight of all functions of CHRAJ, was appointed Commissioner in December 2016.

Mr. Whittal, a Doctoral Candidate at the Doctor of Business Leadership (DBL) of the prestigious Paris-based IPAG Business School/Nobel International Business School, has been elected Bureau Member (Member of the Governing Board) of the Geneva-based Global Alliance of National Human Rights Institutions (GANHRI), representing the Network of African National Human Rights Institutions on the World Body.

Mr. Whittal has honoured speaking engagements within and outside Ghana on any of the triple mandates of the Commission: Human Rights, Administrative Justice and Anti-Corruption, as well as on general governance issues during conferences, workshops, seminars, among others.

He is a Member of the Board of the Data Protection Commission (DPC) of Ghana.