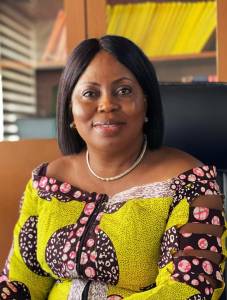 Ms. MERCY LARBI was appointed in January 2020 as a Deputy Commissioner and a member of the Governing Council of the Commission.

Prior to her appointment, Ms. Larbi was the Regional Director for the Ashanti Regional office of the Commission from 2012. She was in charge of about seventeen district offices and represented the Commission in all aspects of its functions in the region.

Deputy Commissioner Larbi first joined the Commission in August 2005 as an Assistant Legal officer posted to Brong Ahafo Region and rose through the ranks to Principal Legal Officer and has since been involved in human rights work.

She is a lawyer and was called to the Ghana BAR in 2004. She holds a Master of Arts (M.A) in Human Rights, Conflict and Peace Studies from University of Education, Winneba, and a Bachelor of Arts (B.A) in Law and Political Science from the University of Ghana, Legon. She was a professional teacher and taught for a number of years before joining the Commission.