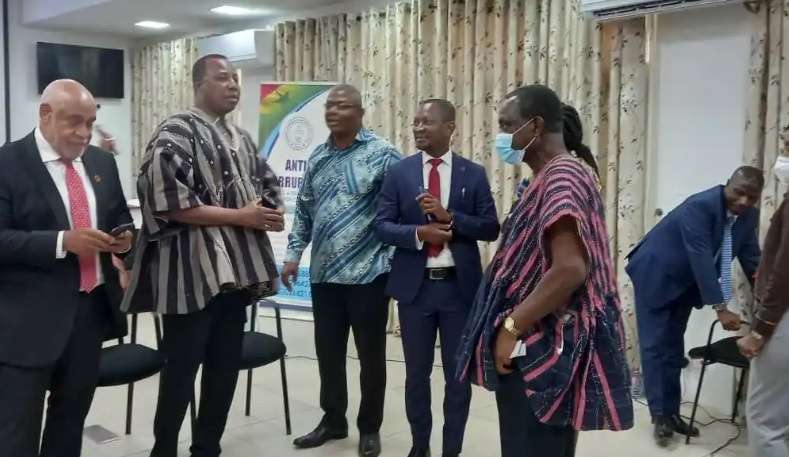 Speaking at the International Anti- Corruption Day celebration held by the Commission on Human Rights and Administrative Justice (CHRAJ) in Accra, the UN Resident Coordinator noted that corruption had not only been known as immoral but a serious crime which betrayed people and democracy.

“Corruption undermines democratic stability and social justice. It is one reason for the overthrow of Governments in the region namely, Guinea, Burkina Faso, and Mali. Corruption steals trillions of dollars all over the world and its siphoned resources of states.”

The occasion coincided with CHRAJ’s symposium which was under the theme” Curbing Corruption in Ghana through a Robust Conduct of Public Officer Law.

Various speakers also took the opportunity to speak on the Bill for Code of Conduct for Public Officers.

Mr Abani noted that if people were unable to access basic amenities such as education, potable water among others, through siphoning of money, then that country would be in a serious problem.

According to him, corrupt practices also inhibited peace practices, undermined the rule of law, worsening poverty and facilitating illicit use of resources, providing arms for arms conflicts.

He said in Ghana one of the most damaging aspects of the environment, (the upsurge of galamsey), could be partly fueled by corruption.

He said under sustainable development goals 16 and the UN’s Convention Action Against Corruption (UNCAC), Ghana was obligated to conduct studies on corruption and to make regular scientific findings and implement measures to curb corruption.

The UN Resident Coordinator said to achieve SDG 16, Ghana needed an estimated 50 billion dollars a year to achieve the SDG goals between now and 2030.

He said with serious liquidity issues facing Ghana due to the macroeconomic challenges, addressing corruption was very innovative.

This, he said, would help Ghana achieve resilient growth and curb poverty growth.

According to him, this year’s International Anti-Corruption Day sought to highlight the crucial link between anti-corruption, peace, security, and development at the global level.

He said tackling corruption should involve all persons and institutions to do away with its negative consequences.

“Civil Society organisation, the academia, youth all have a role to play in the fight against corruption.”

He noted that with the celebration of the day, individuals and institutions would reflect on the mechanisms to fight corruption and make the coming year a better one.

The UN Resident said, “today, corruption has permeated all aspects of society, the public, private, economic, social and environmental hence the anti-corruption messages must cut across all sectors.”

He therefore stressed the need to intensify advocacy on integrity and honesty among the young who are the future leaders of Ghana.

Mr Abani commended the Government, other equity groups and National Anti-Corruption Agencies in their fight against corruption.

“These efforts of these groups are in line with SDG 17 on partnerships. Indeed, the government cannot succeed in this fight alone.”

He also lauded the Government for the Beneficial Ownership Register, saying the register was key to transparency and the work of the Economic and Organised Crime Office (EOCO) in Ghana.

“In Spite of this progress much remains to be done… The biggest room of the world is the room of improvement,” he added.

In his welcome address, Mr Joseph Whittal, Commissioner for Human rights and Administrative Justice, said December 9, had been set aside every year to commemorate the United Nations Convention against Corruption (UNCAC) and to raise awareness on corruption.

Mr Whittal said the day was also used to create awareness of the harmful effects of corruption and the need for concerted and sustained partnership among stakeholders to address it effectively and efficiently.

He said in the past years, the National Anti-Corruption Action Plan (NACAP) had successfully seen law reforms in the country, adding, “NACAP has triggered the passage of not less than 14 pieces of legislation.

The CHRAJ boss noted that the implementation of the Code of Conduct under Chapter 24 remained a challenge.

“However, the peculiar challenge has been what “appropriate action” to take resulting from investigations of breaches of code of conduct under Article 287 of the Constitution.”

He said no one could deny the importance of a Code of Conduct for Public officers in the fight against corruption.

“In fact, allegations of non-compliance with Chapter 24 of the Constitution, especially conflict of interest and non-declaration of assets and liabilities continue to flood the media space.

This year alone, the Commission has received a record number of cases bordering on non-compliance and contravention of Chapter 24 of the Constitution and we are investigating same.

He said efforts to give practical effect to Chapter 24 of the Constitution had resulted in the introduction of the Conduct of Public Officers Bill (CoPO Bill), which had been laid in Parliament three times between 2008 and 2020.

He was optimistic that the CoPO Bill would be laid before Parliament at the beginning of the year 2023.