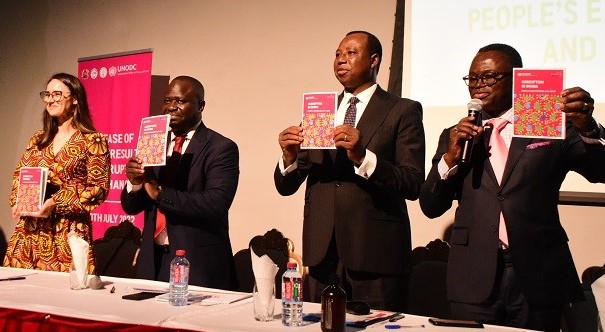 More than a quarter of adults in Ghana, comprising 26.7 per cent of the overall population of the country, in 2021 paid bribes in cash estimated at GH₵5 billion.

Government Statistician, Professor Samuel KobinaAnim, disclosed this during the launch of the 2021 Ghana Integrity of Public Service Survey (GIPSS) -People’s Experiences and Views on Corruption Report yesterday in Accra.

The report was presented by the Commission for Human Rights and Administrative Justice (CHRAJ), in collaboration with the Ghana Statistical Service (GSS) and the United Nations Office on Drugs and Crime (UNODC).

The first comprehensive, nationally representative population survey on corruption in Ghana aimed at collecting evidence-based information from Ghanaians to determine corruption prevalence for the purposes of targeting policy interventions that could enhance the fight against corruption.

Professor Animsaid the report highlighted the scope of bribery, from who gave or took the bribes, how bribery worked, gender dimensions, nepotism, and vote-buying in Ghana.

He revealed that during the survey, at least one out of four persons paid bribes in the country while on average, a person paid bribes five times, which showed an incidence of 17.4 million bribe occurrences in 2021.

“After the end of the survey, we looked at the value of bribes people paid on the average and that came to about GH₵5 billion.  This is affecting the economy and something has to be done to curb or eradicate the menace,” he said.

Prof. Anim advised that the situation needed to be addressed at the grass-roots level in terms of different institutions, sectors and geographical locations.

“From the report, out of the 16 administrative regions, it could be seen that the Western North Region’s prevalence rate was53.4 per cent high whereas the Bono Region was 11.9 per cent low, meaning 10 out of the 16 regions’ rate is higher than the national rate 26.7 per cent.

A Justice of the Supreme Court, Justice Emmanuel Yonny Kulendi, launching the report, said it provided scientific way of measuring corruption for the development of tailored anti-corruption interventions.

“This is not to put down any particular agencies; rather it is for us all to fight against corruption effectively and transparently in all sectors in the country, so let us embrace the survey and accept the results coming,” he said.