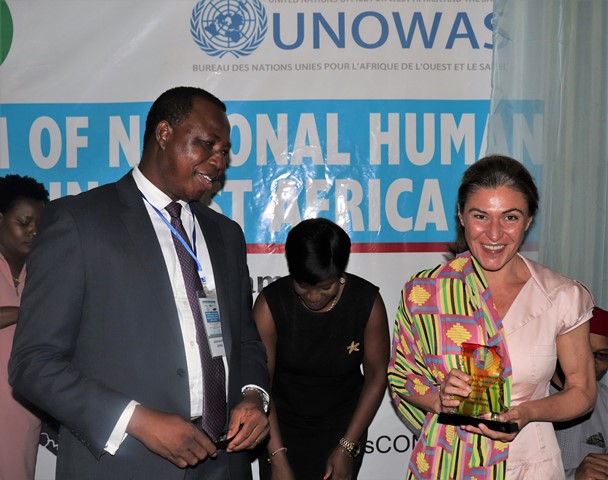 ARAP, FIIAPP and the EU Delegation to Ghana are proud to have received an award during the West Africa Regional Consultation of National Human Rights, held in Accra last week.

In recognition of ARAP’s ongoing support to the Commission on Human Rights and Administrative Justice (CHRAJ) in promoting human rights and anti-corruption, the award was presented by CHRAJ Commissioner Joseph Whittal to our recently appointed Team Leader Ana Sánchez.

The Regional Consultation was hosted by CHRAJ over 29-31 May, in collaboration with the UN High Commissioner for Human Rights (OHCHR), United Nations Office for West Africa and the Sahel (UNOWAS), the Economic Community of West African States (ECOWAS) and the Network of National Human Rights Institutions (NHRIs) in West Africa.

Representatives from these Institutions met with the aim to enhance the role that NHRIs have in promoting and protecting human rights, and assess their performance concerning the “Principles Relating to NHRIs for the Promotion and Protection of Human Rights” (The Paris Principles).

They focussed on the Sustainable Development Goals (SGDs), peace and security, protection of immigrants and ensuring gender perspectives are respected within the NHRIs´ work.  It was an opportunity to review their national influence, the challenges they face, and learn from each other by sharing good practices.

CHRAJ, as the NHRI to Ghana, not only used the occasion to facilitate the meaningful exchange of experiences, but included its own best practice with regards to the implementation of the National Anti-Corruption Action Plan (NACAP).  The role played by ARAP in supporting Ghana’s fight against corruption was consequently awarded.

Following the Consultation, CHRAJ’s Commissioner Joseph Whittal was elected President of the Network of National Human Rights Institutions in West Africa (NNHRIs-WA)’s next term, during its Annual General Assembly held on 31 May.