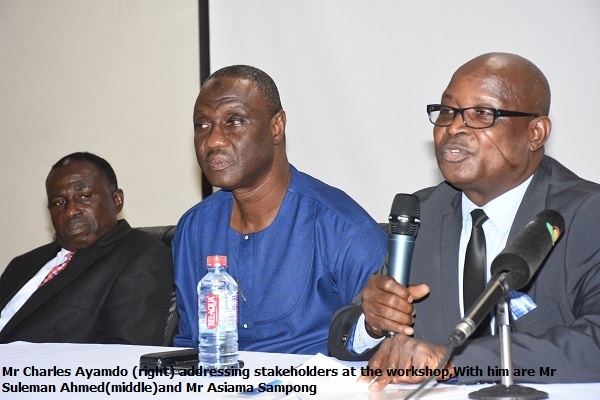 Commission of Human Rights and Administrative Justice (CHRAJ) is advocating strict enforcement of the public officers “sanitation period” to aid in the fight against corruption in the public sector.
The sanitation period, which is enshrined in the National Anti-Corruption Action Plan (NACAP), is the situation where public officers who move to the private sector after retirement are not allowed to deal with the agency or department where they retired for a minimum of two years.
Mr Charles Ayamdo, Director of Anti-Corruption, CHRAJ, said the sanitation period, popularly referred to as ‘cooling off’ in other countries, was a way of preventing conflict of interest which was mostly the “root” of corrupt activities.
Speaking at a stakeholder sensitisation workshop on NACAP in Accra yesterday, he explained that the period was to ensure that retired public officials who have ventured into private businesses do not use information acquired during their previous role to their own advantage.
“The sanitation period for public officials’ provision is very necessary in dealing with conflict of interest which ultimately leads to corruption. While in office, they become aware of tender processes, policies and laws to regulate a particular sector”.
“In some instances, because the public official in question aspires to move straight into a particular business, he may delay or disrupt implementation of policies and regulations governing that sector to their own benefit. This provision is to check the misuse of information and public position,” he added.
Mr Ayamdo said it was expected that after two years, the influence of the retired public official at department or agency would have waned stressing that “most importantly, the provision will check and control movement from the public to the private sector.”
Responding to concerns that the two-year period was not enough, he said similar concerns were raised by the Parliament before the passage of the plan and expressed confidence that it would be reviewed in due course, if necessary, to meet the commitment of the country in preventing corruption.
In order to promote effective implementation of the code of conduct for public officers, he said CHRAJ had trained and assigned 150 ethics officers to various institutions to help in managing ethics.
In the political space, the director reiterated the need for a law to regulate political financing, which has become a conduit for corrupt practices and money laundering.
He said when passed, the law would control and limit investment in political activities in the country.
Addressing the participants on the Ghana Gift Policy, Asiama Sampong, Chief State Attorney, Office of the Attorney General and Ministry of Justice,  said public office holders and public servants were not to accept gifts and if they do, they were required by the plan to hand over gifts received to their heads of institutions.
Consequently, the heads of institutions were also under compulsion to make a decision on how the gift would be disposed off.
He said when public servants accepted gifts, it increases the likelihood of being influenced to engage in corrupt practices.
Mr Asiama said public servants were also required to sign and make a gift statement to their heads of institutions to be forwarded to the Office of the Attorney General every quarter.
“The form requires the officials to provide details including name, particulars of the donor, description of the gift, reason for the gift and decision taken whether you took it or rejected it,” he added.
By Claude Nyarko Adams – GhanaianTimes