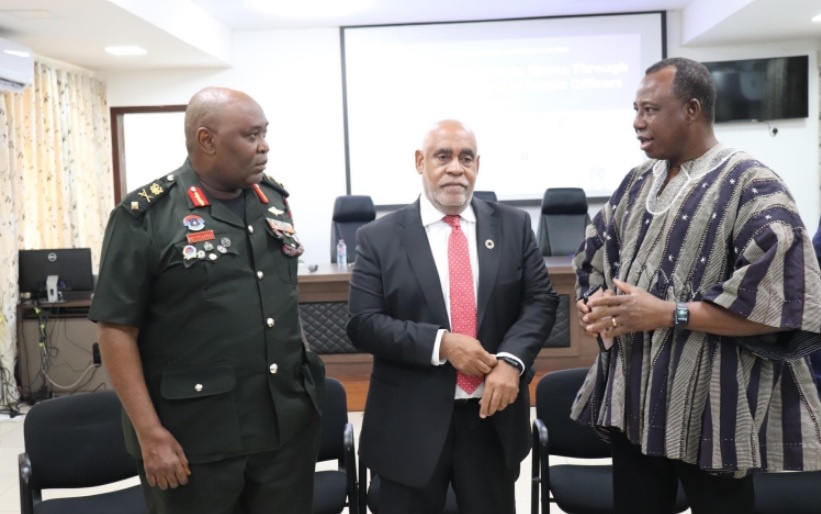 The Commission on Human Rights and Administrative Justice (CHRAJ) has called for concerted and sustained partnership among stakeholders to effectively and efficiently deal with corruption, stressing “Corruption has harmful effects on the broader sector of society”.

“This is because corruption has no borders, and its consequences cut across borders affecting states where it has been perpetrated to states which may have short-term benefits of the corrupt acts but whose reputation and their image would in the long term suffer,” Mr. Joseph Whittal, CHRAJ Commission stated at a symposium to mark International Anti-Corruption Day celebrations in Ghana.

The symposium was organized by CHRAJ and other stakeholders to commemorate the 2022 International Anti-Corruption Day (IACD) which seeks to highlight the crucial link between anti-corruption and peace, security, and development.

The 2022 theme “United Nations Convention Against Corruption (UNCAC) at 20: Uniting the World against Corruption,” which seeks to call on states, government officials, civil servants, law enforcement officers, media representatives, the private sector, civil society, academia, the public and youth alike to play a role in uniting the world against corruption.

Mr. Whittal said the essence of the day is to create awareness of the harmful effect of corruption, stressing that the 2022 global theme is a clarion call for international cooperation and partnership among and between nations all over the world, and domestic agencies and institutions to see the fight against corruption as a collective effort.

“We hope that the 2022 Anti-Corruption Day would make critical contributions to the national effort at tackling issues of corruption and provide the country an opportunity to do a soul searching into public sector integrity and consolidate the gains made in reducing corruption in Ghana,” he said.

He explained that the 2022 IACD seeks to highlight the crucial link between anti-corruption and peace, security, and development.

Mr. Whittal explained that at its core is the notion that tackling this crime is the right and responsibility of everyone, and that only through cooperation and the involvement of every person and institution can we overcome the negative impact of this crime.

Speaking on the local theme: “Curbing Corruption in Ghana through a Robust Conduct of Public Officers Law: Perspectives of Civil Society,” Mr. Whittal said the Commission and its partners are excited about this theme because Ghana has since 2014 adopted the National Anti-Corruption Action Plan (NACAP).

He said it was based on the realization that previous efforts at fighting corruption were individualistic, uncoordinated, and sporadic.

He said the strategic focus of NACAP is unity; “Unity because, NACAP realizes that no one person, institution or state can fight corruption alone.

“That is why the mission of NACAP is to contextualize and mobilize efforts and resources of stakeholders, including government, individuals, civil society, private sector, and the media, to prevent and fight corruption through the promotion of high ethics and integrity and the vigorous enforcement of applicable laws”.

Mr. Whittal explained that in actualizing the NACAP mission activities have been formulated under four Strategic Objectives and are being executed by all sectors of the economy.

“Our successes in almost 8 years of implementation of NACAP have been quite significant especially in the area of law reform because NACAP has triggered the passage of not less than 14 pieces of legislation,” he said.

He said, “all these pieces of legislation are aimed at combatting corruption one way or another, and I wish to commend the Office of the Attorney-General, and Minister for Justice for the roles played in the passage of these laws”.

“As you are no doubt aware, Chapter 24 of the 1992 Constitution provides for the Code of Conduct for Public Officers in Ghana dealing with conflict of interest, declaration of assets and liabilities, and oaths of office. However, there is no legislation or Act of Parliament to give effect to the constitutional provisions on the code of conduct”.

In the circumstances, Mr. Whittal noted that the implementation of the Code of Conduct under Chapter 24 remains a challenge despite the mandate given CHRAJ and the Chief Justice to investigate breaches of the Code of Conduct and take such action “that is considered appropriate in respect of the results of the investigations” under article 287 of the Constitution.