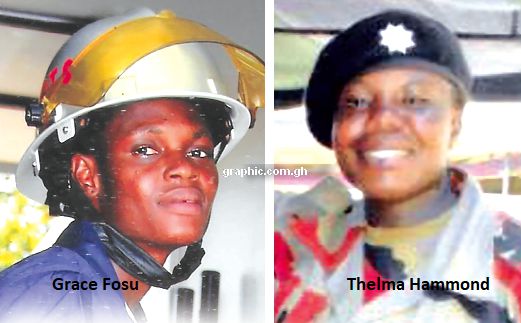 Two service women of the Ghana National Fire Service (GNFS) who were dismissed in 2013 and 2014 for getting pregnant have been reinstated.

Fire Woman (FW) Thelma Hammond and FW Grace Fosu’s reinstatement comes after a long legal battle with the state to have their dismissal reversed because it was against their human rights.
The final legal tussle came off on January 22, this year, when the High Court threw out an appeal by the Attorney-General (A-G) against the Gh¢50,000 costs awarded to either woman in April 2018 and a stay of execution.

Immediate reinstatement
A letter by the Chief Fire Officer, Mr Edwin Blackson, to the Commission on Human Rights and Administrative Justice (CHRAJ) stated that the two fire women “have been reinstated into the service with immediate effect”.

The letter, dated March 13, 2019, accordingly, directed the two women to report to the Greater Accra Regional Fire Officer for reassignment.
It further stated that the necessary “arrangements are being made to effect the payment of their entitlements”.

Discriminatory regulation
Ms Hammond and Ms Fosu, after their dismissal, petitioned CHRAJ and the commission took the matter to the Human Rights Division of the Accra High Court.

In April 2018, the court, presided over by Mr Justice Anthony Yeboah, ruled in favour of CHRAJ and the two fire service women that Regulation 33 (6) of the Conditions of Service of the GNFS which prohibited fire service women from getting pregnant within the first three years of their employment was discriminatory and infringed on the rights of women.

It ordered the GNFS to pay Ms Hammond and Ms Fosu GH¢50,000 each as compensation and also ordered the service to reinstate them.

“The second and third applicants (Ms Hammond and Ms Fosu) are women who are protected under Article 17 of the 1992 Constitution. The right to family includes their right to be pregnant and they are entitled to the right to choose when to become pregnant,’’ Mr Justice Yeboah said.

The court was also of the view that unlike their male colleagues, Regulation 33 (6) negatively affected the “marriage and sex life” of the women during their first three years of employment.

“The women employees are, therefore, subjected to adverse treatment. The GNFS discriminated against the second and the third applicants on the ground of gender,’’ Mr Justice Yeboah added.

Appeal
The A-G, however, appealed against the quantum of costs awarded and applied for a stay of execution on the judgment.

The CHRAJ fought the challenge and the court, on January 22, 2019, ruled that the previous suit was so thoroughly covered that there was no basis for an appeal or a stay of execution to succeed.

With the victory, CHRAJ wrote to the GNFS on February 6, 2019 for the service to begin implementing the judgment of the court or face a contempt of court suit by the end of the month if it did not comply.

The GNFS, in a letter to the commission, said the two had been reinstated with immediate effect, with arrangements being made to effect payment of their awards.

Meanwhile, CHRAJ has urged all institutions to take notice of the judgment and revise all regulations and conditions that infringe on the rights of women to reproduction and marriage, particularly banks and financial institutions in the private sector.