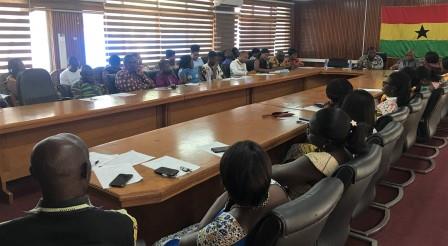 The Commission on Human Rights and Administrative Justice (CHRAJ) today, joined the international community to commemorate the International Women’s Day.
The Commission observing the day organised a symposium to examine and assess its activities in relation to the protection and projection of the rights of women within the Commission, as well as in Ghana and beyond.
In recognition of the fact that women’s contribution to labour, productivity and family subsistence cannot be overemphasised, Ghana has since independence been exploring measures to promote women’s rights and equality, and has historically, had varying degrees of successes in its efforts at effectively ensuring women’s representation in national decision-making bodies.
In this regard, the Commission as Ghana’s National Human Rights Institution has since its inception made tremendous strides in ensuring that the rights of Ghanaian women, as well as all women living in Ghana, are protected and projected.
The Commission as part of its mandate of promoting and protecting the rights of women in 2017 for instance received and handled 9,186 individual complaints of which 5,328 representing 58% were lodged by females. In the same year, 1,152 complaints reported to the Commission directly involved special women’s rights in the areas of spousal right to maintenance, violence against women and reproductive rights issues.
The Commission pursuant to its protection mandate also succeeded in bringing before the Human Rights Court, a case in which two female workers of the Ghana National Fire Service were dismissed for getting pregnant at work, and obtained a favourable decision for them which is being enforced.
The Commission in its women advocacy drive occasionally collaborates with key stakeholders like the Government, the Ministry of Gender, Children and Social Protection, and the Domestic Violence and Victim Support Unit (DOVVSU) of the Ghana Police Service to ensure that the rights of women are not violated.
International Women’s Day is a global day set aside to celebrate the social, economic, cultural and political achievements of women, and also call for the acceleration of gender balance.
The International theme for the celebration is “THINK EQUAL, BUILD SMART AND INNOVATE FOR CHANGE”, while the campaign theme which Ghana has adopted is “BALANCE FOR BETTER”.
The Commissioner for CHRAJ, Mr. Joseph Whittal sharing his thoughts on the International theme drew participants’ attention to the fact that as the business of nationhood was being carried out, it was important to think about men and women playing their respective roles towards nation building. He indicated that the theme also meant reviewing existing directives and principles of State policy as regards equality and non-discrimination with respect to women. He wondered whether as a nation, measures were being taken in equal perspectives whenever discussions about women in relation to traditions and customs were being held, and whether efforts to curtail discrimination against women were being considered and implemented.
Commissioner Whittal observed that, building a society in a smart manner takes cogitation of the future and husbandry resources that ensured adequate provision for future needs towards nation building. He also expressed belief that, a smart society, or nation, was one which cleared all obstacles to ensure that the ‘girl child’ was equally in school as the ‘boy child’.
Mr. Whittal further explained that life was all about struggles, and that society was about change, and so if society was left to a standstill due to people’s inability to think, things would be difficult. He, therefore, suggested that innovation for change was not about change itself, but bringing out transformation that would facilitate positive developments within the society in the interest of women.
Congratulating Ghanaian women in general, the Commissioner expressed special admiration as regards the significant innovations exhibited and put in place by these women towards the developmental progress of the society predominantly.
CHRAJ’ s Deputy Commissioner Mr. Richard Quayson on his part, encouraged women to continue to soar higher and higher even as they persist in their struggle towards the achievement of equality. He cited the judicial service where lady judges despite the fact that they are women, have risen above all odds and are doing exploits.
Mrs. Mavis Andoh of the Human Rights Department was the main discussant for the occasion.