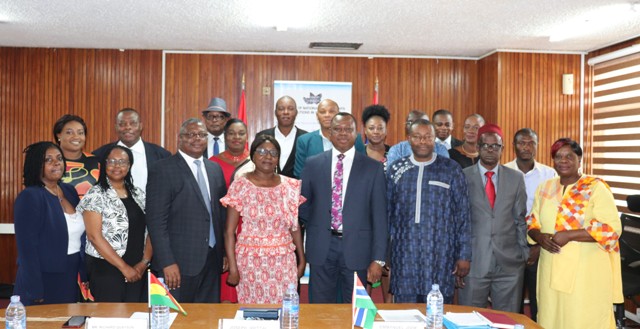 Commission Members of the Gambian Human Rights Commission are on a three – day study tour to the Commission on Human Rights and Administrative Justice (CHRAJ) to acquaint themselves with best practices to enable them appreciate opportunities and challenges of National Human Rights Institutions.
The five Commission Members led by Mr. Emmanuel Daniel Joof, Chairperson of the Commission, are expected to familiarise themselves with how CHRAJ, an “A” status West African National Human Rights Institution (NHRI) with similar powers to theirs, and similar mandate, performs its core role on promotion and protection issues and related matters. They believe that since they are gradually building their institution, it is important that from the on-set, they are advised and guided by a well-established, fully functioning NHRI such as CHRAJ, which operates in the same region and under similar legal, socio-political and economic constraints as The Gambia.
Through this Study Tour, the delegation would also be exposed to the extensive track record of CHRAJ in advancing all aspects of the rule of law in The Gambia – on the judiciary, law enforcement agencies and the correctional system. It is widely accepted within the United Nations (UN) system and Office of the High Commission on Human Rights (OHCHR) that CHRAJ is one of the leading, if not the leading NHRIs in West Africa.
Although all the five Commissioners have a demonstrated track-record of advancing the cause of human rights, it is important that the Commission is properly supported in understanding the scope of its domestic mandate, as well as the role that it plays in human rights protection and promotion in the region at an early stage.
On February 14, 2019, the President of The Gambia, Adama Barrow swore in the five Commissioners of the Gambian Human Rights Commission at a ceremony in the State House in the presence of United Nations representatives in The Gambia. The United Nations applauds efforts by The Government of The Gambia in the advancement of human rights through the establishment of their Human Rights Commission, whilst reaffirming its commitment to support it in the execution of its mandate.
Between March and May 2019, the Commission benefitted from series of capacity building activities with the support of the UN Transitional Justice Project, including a Study Tour to Geneva to meet with OHCHR colleagues and attend the Annual Meeting of the Global Alliance of National Human Rights Institutions, an Orientation Retreat and a Meeting with Stakeholders in The Gambia.
Gambian’s National Human Rights Commission (NHRC) was established by an Act of the National Assembly of The Gambia in 2017. It is a permanent body set up in full compliance with the Paris Principles and with a broad mandate, including the promotion and protection of human rights, recommending appropriate remedial action to the Government and seeking appropriate redress on behalf of victims, as well as increase public awareness and education programmes to promote a culture of human rights in The Gambia and assist the Government in the formulation of appropriate policies to guarantee human rights.
Commissioner of CHRAJ, Mr. Joseph Whittal, Deputy Commissioner, Mr. Richard Quayson, Directors and some selected staff welcomed the delegation warmly and are ready and delighted to  take them through presentations on the Overview of CHRAJ, Structure and set-up of CHRAJ, Operations of Human Rights Department, Operations of Anti-Corruption Department, Operations of Administrative Justice Department, Operations of Public Education Department, Operations of Research Department, Investigations: practice and procedures, Human Rights Mechanisms – Treaty Bodies, Universal Periodic Review (UPR) and UN Special Procedures, Engagement with key stakeholders (government agencies, rule of law institutions, Development Partners (DP), and Civil Society Organisations (CSOs).
The team as part of their study tour would visit sister institutions like the National Commission for Civic Education (NCCE), Head Office, and the Commonwealth Human Rights Initiative (CHRI) in Accra.
The delegation is expected to hold a debriefing session with CHRAJ Commission members after the tour.