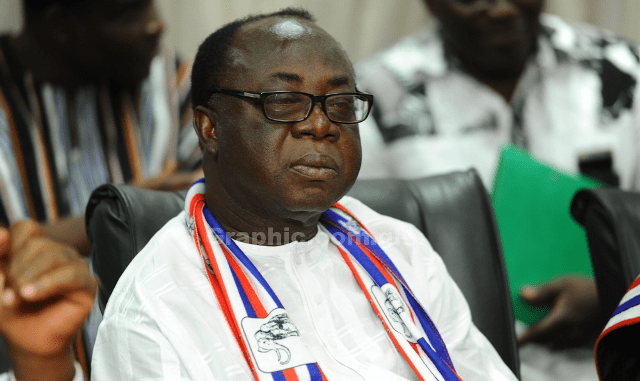 The Chairperson of the New Patriotic Party (NPP), Mr Freddie Worsemao Blay, will on Friday, June 7, 2019, face committal proceedings for contempt of court at an Accra High Court.

The proceedings are for his persistent failure to respond to several requests from the Commission on Human Rights and Administrative Justice (CHRAJ) to furnish it with information about the 275 buses he was supposed to have brought into the country and donated to the party’s constituencies.
Prison custody
In the motion on notice for the contempt proceedings sighted by the Daily Graphic, CHRAJ prayed the court for an order to commit Mr Blay into prison custody for disobeying its lawful requests.
According to the motion, on July 6, 2018, CHRAJ received a complaint from the Coalition of Social Justice, requesting the commission to investigate Mr Blay for corruption in respect of his role in the purchase of 275 buses for the 275 constituencies of the ruling party, the NPP.
After assessing the complaint, the commission concluded that it had the mandate to investigate and, therefore, commenced investigations.
Requests
The motion stated that on August 20, 2018, CHRAJ wrote to the respondent to submit his comments on the allegation “within 10 working days, unless he admits to the allegations”.
“The said letter was duly delivered to the respondent but he failed, refused/and or neglected to oblige the commission with his comments as requested,” it stated.
CHRAJ said it, therefore, wrote another letter dated September 24, 2018, “reminding the respondent to submit his comments and extended the time to Friday, October 5, 2018 for him to submit his comments”.
That letter, according to the motion, was again ignored by the respondent.
Subpoena
In the motion, CHRAJ stated that as a last straw, it issued a subpoena dated January 21, 2019 for the respondent to produce certain documents before it by Monday, January 28, 2019 and that, the motion said, was also ignored.
It said when the respondent again failed to respond, the commission took into consideration his busy schedule as the board chairman of the Ghana National Petroleum Commission and the chairman of the NPP and so it went out of its way to write another letter dated April 11, 2019, giving him a final reminder to submit the documents.
The respondent failed again to respond to the request, the motion stated.
“The respondent, by his conduct, has demonstrated that he has no respect for the law and will not obey the lawful request of the commission unless compelled by the authority of this honourable court,” CHRAJ stated in its motion.