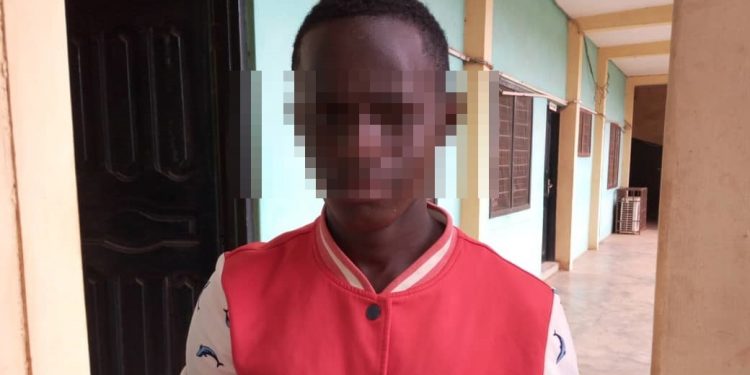 The Commission of Human Rights and Administrative Justice (CHRAJ) has secured bail for a 15-year-old boy who has been remanded into prison custody for about one year.
The suspect, Issah Yakubu was arrested by the Gambaga police in August 2018, for allegedly leading a gang to steal a motorbike.
He denied knowledge of the crime yet he was transferred to the Tamale Central Prisons where he was remanded without due trial.
According to the Juvenile Justice Act, domestic law in Ghana, minors should be kept in remand homes. And If there are no remand homes as it is in Northern Ghana, the juvenile offender should be sent back to the custody of their parents and brought to the court each time the case is called.
Issah Yakubu was however remanded into prison custody.
He recalls the experience at the hands of his accusers and the police at the time of his arrest.

“I was with my friends at a musical concert and people stormed the place; held me, and asked me about the whereabouts of their motorbike, and I told them I don’t know anything about a motorbike”, the suspect narrated.
He continued, “And they pulled a knife on me, and kept beating me. Finally, they took me to the police and the police also used electric shocks on me, and caned me with their stick just to force me to confess”.

Unfortunately, the teenager’s rights were abused as he was wrongfully remanded for close to a year without bail, until the Commission on Human Rights and Administrative Justice, intervened to secure bail for him.
Ghana’s juvenile justice system says the trial of a juvenile should not exceed six months after the arrest. It also states that they are supposed to be offered bail within 48 hours.

“I slept in the same prison room with other convicts, some were even older than my father. The food was terrible. Sometimes it taste like it has gone bad” the suspect added.

Today, he is returning home in the company of his mother after spending nearly a year with adults in the same prison, although this is against the law on juvenile offenders.
According to the suspect, the Police prosecutor told the Nalerigu District Court which held a pre-trial of his case that, he had admitted the offence which led to him being remanded and probably forgotten at the Tamale Central Prisons.

“I didn’t say anything to suggest that I admitted to the offence. The way they used the electric shock on me I was even confused. The prosecutor just wrote things on the file that I didn’t even know about”.

Sources at the Tamale Circuit Court told Citi News that his accusers and witnesses often failed to appear in court each time his case was called.
Northern Regional Director of the Commission on Human Rights and Administrative Justice, CHRAJ, Stephen Azantilo, who served as the lawyer for the suspect says the process leading to his remand was wrong.

“In the first place, this is a juvenile, he is not supposed to be remanded into adults’ prisons. that is the position of the Commission”, the lawyer said to the presiding Judge at the Tamale Circuit Court, Justice Twumasi Appiah, who subsequently released the suspect on bail on Wednesday, July 25, 2019.
“As a matter of fact, you are not supposed to keep a juvenile in detention for more than six months. it shouldn’t. If that is the case you have to discharge the juvenile, that is what the law says”, lawyer Azantilo further argued.

Mother of the suspect, Damata Amadu, who stood surety for his son, says she sold virtually everything she had including her three cows and shea nuts to pursue justice for her son. She says all her efforts came to nothing until CHRAJ got involved.

“I couldn’t eat because no one was there to farm for me. Now that he has been released; he will come and assist to herd the cattle.”

Issah Yakubu is due to reappear in court on August 8, 2019, now that he has been granted bail. But it remains to be seen how far this case would go seeing that his accusers are no longer pursuing the case.
Source: Maxwell Suuk | citinewsroom.com | Ghana