The Commission on Human Rights and Administrative Justice (CHRAJ) has signed a GHC17.8 million contract for the reconstruction of the burnt part of the Old Parliament House. The four storey building project which is being funded by the Government of Ghana, is expected to be completed in eighteen months.
The Commissioner of CHRAJ, Mr. Joseph Whittal, in his opening remarks described the project as a major resource for the Commission specifically for the provision of office accommodation for staff to enhance their productivity in performing the Commission’s mandates (Human Rights, Anti-Corruption, and Administrative Justice), and also a 500 to 700 sitting capacity auditorium to accommodate interested members of the public to witness the Commission’s public hearings during investigations.
He also disclosed that the Commission would be taking delivery of some vehicles in a few weeks as additional resources, which would be used to monitor and coordinate activities relating to the implementation of the National Anti-Corruption Action Plan (NACAP), a clear indication of government’s commitment to resource the Commission.
Mr. Whittal acknowledged the fact that government’s resource for the Commission has improved and was appreciative of government’s support during the pulling down of the burnt part of the Old Parliament House which was a threat to the health and lives of the staff, and now support to reconstruct. The Commissioner said though unable to bring back exactly what was lost, he was hopeful that approximately the block with its adjoining offices would be produced.  He expressed the joy and happiness of the Commission saying “this is a major takeover after the fire outbreak”.
Representative of the Architectural and Engineering Services Limited (AESL), the Commission’s Consultant and Project Coordinator, Mr. William Sackey, stated that the same architectural output for the burnt part of the Old Parliament House was being adopted. He said they were happy to start implementation of the project, assuring that his institution would guard against shoddy work and ensure that value for money is achieved.
The Chief Quantity Surveyor of Cymain Ghana Limited, Project Contractor, Mr. Joseph Ofosu Appiah, was grateful to the Commission for the confidence reposed in him. He assured all stakeholders that a good job would be done to justify their vision which has quality as its hallmark.
The Parliamentary Chamber and its adjoining offices, which housed some staff of CHRAJ, Economic and Organised Crime Office (EOCO), and the Office of the Sole Commissioner of Judgement Debt, was gutted by fire on Thursday, 19th of December 2013.
The Old Parliament House, which used to be the Accra Community Centre during the colonial era, served as the first Parliament House when Ghana attained independence in 1957. 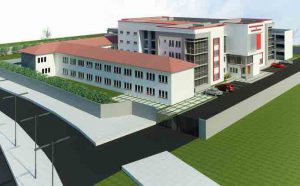 ARTISTIC IMPRESSION OF THE BUILDING