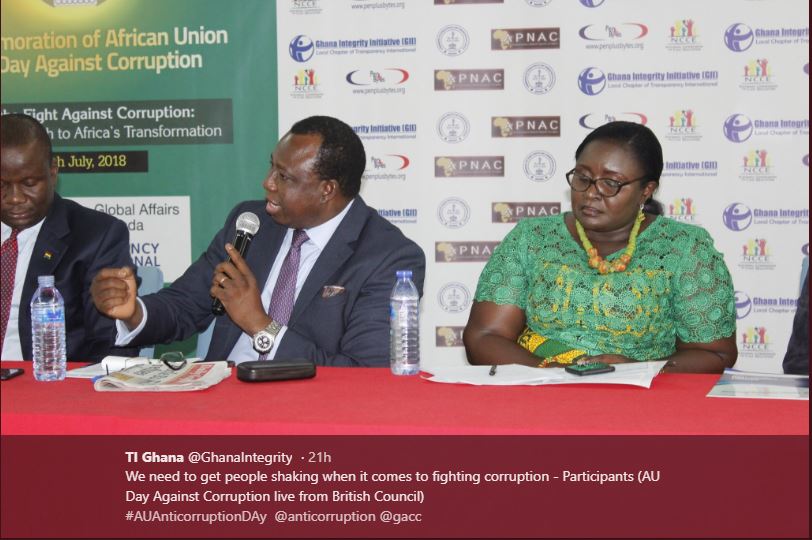 Commissioner of CHRAJ Mr. Joseph Whittal has queried whether Ghanaians are angry enough to proactively question owners of properties in the light of their known income.
He also wondered at the outcome of investigations, arrests, and convictions of corrupt people.
Commissioner Whittal expressed dissatisfaction about situations where people who are alleged to be corrupt are set free because there is no enough evidence to prosecute them.
Mr. Whittal who was the Chairman on the occasion of the Commemoration of the AU Day Against Corruption raised these issues in his welcome address to commemorate this year’s African Union (AU) Day Against Corruption in Ghana.
The CHRAJ Commissioner indicated that the fight against corruption can only be won if far reaching decisions that would lead to positive transformations are taken.
He lauded the AU for setting aside this year to fight corruption, adding that this move calls for a robust action to confront corruption and put the continent in the right light.
The Day was organized by the Ghana Integrity Initiative (GII), a civil society organization in collaboration with CHRAJ, the National Commission for Civic Education (NCCE), and the African Parliamentarians Network Against Corruption (APNAC) to reflect on actions being taken by African governments to fight corruption.
The AU has tagged 2018 as the African Anti-Corruption Year, aimed at elevating the efforts and activities that key players are deploying and implementing in fighting corruption on the Continent.
The theme for the Year is “Winning the Fight Against Corruption: A Sustainable Path to Africa’s Transformation.