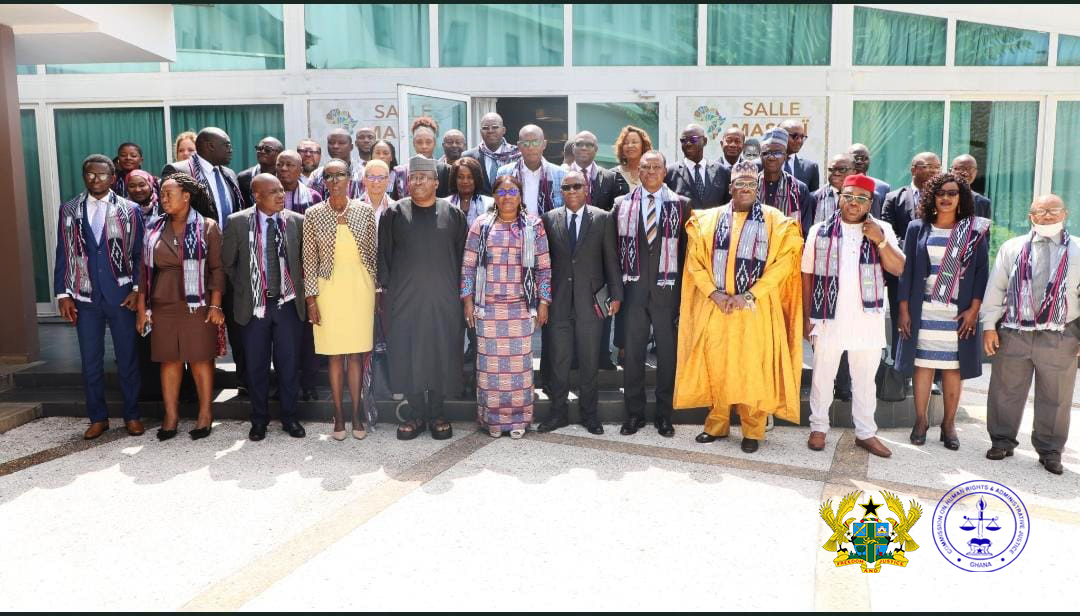 “Ghana’s Commissioner of The Commission on human right and administrative Justice has been retained as President of the Network of National Human Rights Institutions in West Africa for another 3 year term, and the CHRAJ as an Institution given a standing ovation by members of the network of NHRI’s West Africa for the insightful leadership the Commissioner provides and great hosting of the Network’s Secretariat in Ghana”

The meeting was organized by the network of National Human Rights Institutions of West Africa under the auspices of the Côte d’Ivoire NHRI, with the support of the Commission of the Community of West African States (ECOWAS), the Office of the United Nations High Commissioner for Human Rights (OHCHR) and the United Nations Office for West Africa and the Sahel (UNOWAS). It aimed to share experiences and strengthen regional cooperation for the effective implementation of strategies for the promotion and protection of human rights in West Africa.

Representatives of NHRIs from fourteen (14) countries in the West African region,  ECOWAS Commission and the United Nations took part in the meeting. They addressed a wide range of issues, including the independence and institutional development of NHRIs, the strengthening of their role in the prevention, promotion and protection of human rights, as well as the various human rights challenges currently facing the region. It was noted that some National Human Rights Institutions are facing a challenge of being dissolved. To this end the meeting noted that concerted good offices mission be undertaken to Cabo Verde and other such NHRIs having similar challenges.

In the discussions, particular emphasis was placed on threats related to terrorism, intercommunal and gender-based violence, shrinking civic space and impunity, increased spread of hate speech and human rights violations in the context of preventing and countering violent extremism/terrorism and ongoing electoral processes and political transitions in the ECOWAS region, and on the promotion and protection of the rights of vulnerable groups, including women, children and migrants.

While welcoming their government’s support for the implementation of the mandates of national human rights institutions, participants stressed the importance of providing them with more State resources and strengthening their relations with national authorities and civil society organizations, which are essential for the promotion and protection of human rights.

Participants expressed concerns over the persistence of terrorism and violent extremism in the region. They recommended strengthening the capacity of the regional network of National Human Rights Institutions in West Africa, and its members through the establishment of a guideline/framework to enhance monitoring and promote a more effective response to human rights violations in the context of terrorism and violent extremism.

The participants also urged NHRIs to continue monitoring electoral processes and to engage with relevant stakeholders to ensure that these processes are inclusive, peaceful, transparent, and respectful of Human rights and rule of law. The participants also highlighted the importance of continued engagement with transitional authorities to advocate for the respect of Human rights and the accelerated return to constitutional order and the rule of law.

The participants also noted the need for States to utilize African and international development frameworks and mechanisms for the promotion and protection of human rights. They recommended NHRIs to collaborate with national institutional development entities such as statistical agencies as necessary means of ensuring the implementation of these international and regional human rights mechanisms.

NHRIs also welcomed the good partnership and collaboration with the ECOWAS Commission and the United Nations system. To this end, they called for the strengthening of collaboration with these organizations around emerging human rights issues in West Africa. The participants welcomed the commitment of the United Nations to support the implementation of NHRIs’ initiatives for the promotion and protection of human rights for sustainable peace, security and development in West Africa.

National human rights institutions expressed solidarity with victims of human rights violations particularly relating to the issue of  migrants at the border with Morocco and Spain and request expeditious investigations into such and similar incidence by the relevant authorities.

Finally, participants  extended their appreciation to the National Human Rights Institution and  Government and people of the Republic of Cote D’Ivoire for hosting the consultation and for their hospitality.