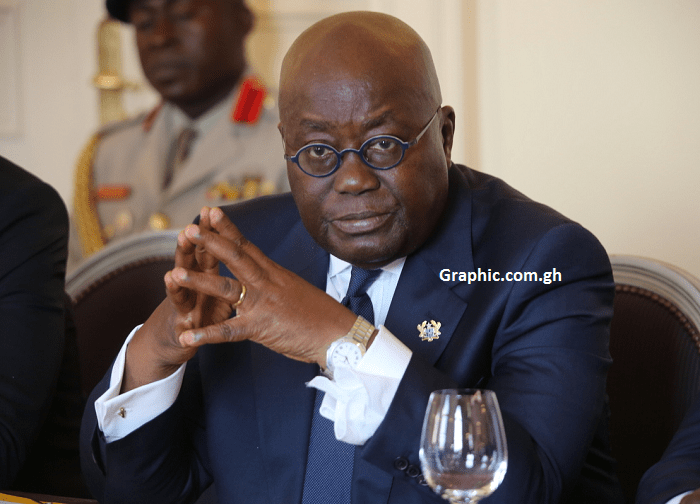 The Commission on Human Rights and Administrative Justice (CHRAJ) has confirmed receipt of a petition from President Nana Addo-Dankwa Akufo-Addo requesting it to look into breaches of conflict of interest by the Chief Executive Officer (CEO) of the Public Procurement Authority (PPA), Mr Adjenim Boateng Adjei.

The President sent the petition to CHRAJ soon after a press statement from the Jubilee House announced Mr Adjei’s suspension for allegations of conflict of interest and acts of corruption levelled against him.

That followed investigations by the freelance journalist, Mr Manasseh Azure Awuni, contained in a documentary titled: ‘Contracts for Sale’, in which Mr Adjei is alleged to have used his influence and position as the CEO of the PPA to execute contracts through some private companies he allegedly set up.

Mr Adjei is also alleged to have confessed to some of the allegations levelled against him.

A statement signed by the Director of Communications at the Presidency, Mr Eugene Arhin, and issued yesterday said: “President Akufo-Addo has, subsequently, referred the allegations involving conflict of interest to the Commission on Human Rights and Administrative Justice (CHRAJ) and those relating to potential acts of corruption to the Office of the Special Prosecutor (OSP) for their prompt action.”

“The President has also notified the Chairperson of the Board of the PPA to ensure that Mr Adjei hands over his office expeditiously to Mr Frank Mante, the Deputy Chief Executive Officer of the PPA,” it added.

The Deputy Commissioner of CHRAJ in charge of Anti-Corruption and Education, Rev. Richard Quayson, confirmed to the Daily Graphic that a petition had been received from the President.

He added that the petition came with a pen-drive containing Mr Awuni’s investigative documentary. He said the commission was assessing the complaint as an initial step.

“In matters relating to conflict of interest, the law requires that after assessing the petition, we first write to the person about the matter to admit or deny it.

“If the person admits the breaches, CHRAJ will then go ahead to look into the extent of the breach; but if the person denies them, then an investigation is conducted to find out,” he explained.

Rev. Quayson said the commission would, by Monday, set all the processes needed in getting to the facts of the case in motion.

The OSP has officially written to the former PPA boss to report himself to the OSP on August 29, 2019 for questioning.

Letters signed by the Special Prosecutor, Mr Martin Amidu, said those expected to report alongside Mr Adjei were the directors and shareholders of Talent Discovery Limited (TDL) and B-Molie Enterprise Limited to assist in investigations into procurement malpractices.

They would also be required to provide information and produce documents, pursuant to sections 29 and 73 of the Office of the Special Prosecutor Act, 2017 (Act 959) and Regulation 10 of L. I. 2374.

The Daily Graphic has learnt that the Auditor-General and the OSP have been investigating Mr Adjei’s activities concerning complicity in the award of contracts for the past six weeks.

According to sources close to the case, the two bodies had gathered documents from the Registrar-General’s Department and abroad as part of their investigations.

They said the OSP, for instance, had been conducting preliminary investigations into suspected commission of corruption and corruption-related offences by the aforementioned companies.

Meanwhile, Mr Awuni has praised President Akufo-Addo for the swift manner in which he reacted to the story.
He said “the swift action by the President is commendable and appropriate”.

“Referring the matter to CHRAJ and the OSP for further investigation is also in the right direction,” he told the Daily Graphic in a short interview hours after the President’s action against Mr Adjei.

“It is encouraging when leaders take action on wrongdoings that are exposed by the media. It also serves as a strong warning to other appointees,” he added.

The Executive Director of the Ghana Integrity Initiative (GII), Mrs Linda Ofori-Kwafo, told the Daily Graphic that Mr Adjei’s suspension was one of the first steps needed in getting to the bottom of the corruption and conflict of interest allegations against him.

She said the documentary showed that more needed to be done in the campaign against corruption.

She said the GII and its partners were adopting new strategies in the anti-corruption drive by mobilising all civil society actors, including the media, to unearth corrupt acts and ensure prosecutions.

The coalition, however, tasked President Akufo-Addo to show a level of commitment to the fight against corruption by further suspending the entire Board of the

PPA, pending investigations by the OSP and CHRAJ.

“The board cannot be left blameless in this whole contracting saga, as revelations made in the said documentary raise serious concerns about the board’s understanding of the Conflict of Interest injunction imposed by Article 284 of the 1992 Constitution and how to manage it.

“Additionally, the board’s oversight or possible complicity in the possible abuse of the restricted tendering rules requires it to step aside for a thorough investigation to be completed,” the coalition, comprising the GII, the Media Foundation for West Africa (MFWA), the Centre for Democratic Development (CDD-Ghana) and the Ghana Anti-Corruption Coalition (GACC), said.

The coalition asked the President to additionally suspend the use of restricted tendering and single source processes while investigations of the PPA boss were underway.

It asked the President to also instruct all other investigative bodies not to initiate or trigger any parallel investigations to the OSP-CHRAJ probe.

“The coalition has also taken note of an ongoing collaboration between the Audit Service and the OSP related to some of the contracts mentioned in the documentary. We commend the Auditor General and the OSP for their swiftness and call on them to direct their resources to investigate all contracts awarded using any other methods other than competitive tendering under the stewardship of the current board and Mr Adjei.

“We are also of the view that personnel of the various ministries, departments and agencies (MDAs) may be complicit in a possible grand scheme to corrupt the public procurement system,” it added.

It further called on the OSP and the Audit Service to extend their investigations to MDAs where restricted tenders and single sourced contracts might have been fixed in favour of companies linked to personnel of the MDAs.

Among other demands, the coalition urged the investigative bodies to, as a matter of urgency, consider the monitoring of the assets and accounts of individuals implicated to ensure that the state was able to recover any money appropriated illegally.

“Even though CSOs recognise the prompt action by the government on the matter, we encourage the President and the government to go the full nine yards with this case, as the recent investigations into alleged corrupt conduct of high-profile government appointees have not yielded encouraging outcomes as far as the fight against corruption is concerned,” it said.

The coalition said it expected the government to investigate the case thoroughly, prosecute, where necessary, and sanction all those who would be found culpable, while any resources lost to any illegal ventures were retrieved.
It said it would monitor closely the efforts of all agencies involved to ensure that justice was served.

Meanwhile, the acting CEO of the PPA, Mr Mante, is an accomplished procurement practitioner and lawyer.

He is a Fellow of the Chartered Institute of Purchasing and Supply (FCIPS), a Chartered Member of the Institute of Logistics and Transport (CMILT) and a Certified Professional in Supply Management (CPSM).

Prior to joining the PPA, Mr Mante had worked with Crown Agents, run a procurement consultancy and lectured part-time at the Ghana Institute of Management and Public Administration (GIMPA).

Mr Awuni’s work unraveled how Mr Adjei, who was appointed in March 2017, formed a company in June 2017 for the sale of government contracts at a fee.

The documentary alleged that interested persons were to pay GH¢5,000 as registration before procuring the contracts.

The GH¢5,000 registration fee was waived for individuals capable of paying for the contract documents upfront.

The investigations further alleged that TDL, a company incorporated in June 2017, barely three months after Mr Adjei was appointed PPA boss, won a number of government contracts through restrictive tendering. Mr Awuni also alleged that the company was engaged in selling contracts.

Undercover encounters with the General Manager of the company, Mr Thomas Amoah, revealed that the company was selling a GH¢22.3 million road contract to K-Drah Enterprise, a fake company the journalist used for the investigation.

That contract was awarded to B-Molie Limited, a company Mr Amoah said was a sister company of TDL.

The company also had for sale a Ministry of Works and Housing contract to construct a concrete drain at Santa Maria in Accra, as well as a contract to build a one-storey dormitory block in the Asante Akim North District.

After demanding and taking the registration fee of GH¢5,000 and deposit from Manasseh’s undercover agent, Mr Amoah, who was also the one who signed the contracts on behalf of the company, handed over three contracts when K-Drah Enterprise promised to come on a particular Thursday and pay for one of the projects.

The MDAs confirmed in the documentary that the contracts being sold by TDL were authentic contracts that had been awarded to the company.
The company also had contracts with the Ghana Water Company Limited (GWCL), the Ghana Cocoa Board (COCOBOD) and the Ghana Ports and Harbours Authority (GPHA).

The TDL had also been shortlisted for restrictive tendering by the Bank of Ghana for the supply and installation of air purifiers.

It was also shortlisted by the Roads and Highways Ministry for three road contracts.
Evaluation is ongoing.

The PPA Board, in the documentary, confirmed that TDL was shortlisted by the Ministry of Inner Cities and Zongo Development for a contract in 2018.

It also confirmed that TDL was sent to the PPA on 14 occasions for restrictive tendering approvals.
Such contracts are approved by the PPA, of which Mr Adjei was the CEO.

A search at the Registrar-General’s Department revealed that the two directors of the company were Mr Adjei and Francis Arhin.
The unique spelling of the CEO’s “Adjenim” and Adjei was the same as that contained in the registration documents, the investigations uncovered.