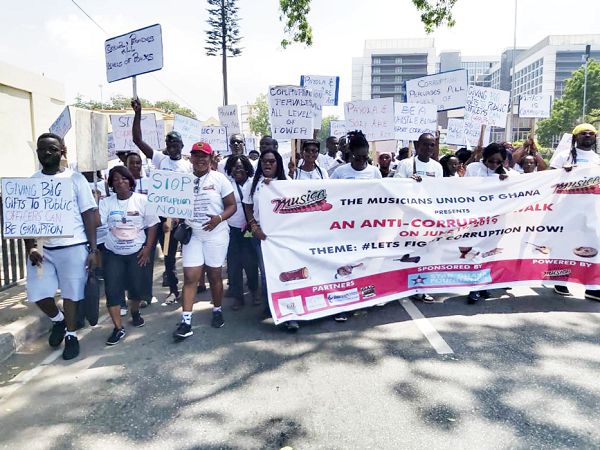 The Greater Accra Regional Director of CHRAJ, Ms Mary Nartey, has tasked those in the creative arts industry to use their talents to fight corruption.

This is because they have the ability to influence people’s behaviours and attitudes with their craft.
Mrs Nartey made the call on Wednesday, after a walk organised by the Musicians Union of Ghana (MUSIGA), with support from STAR-Ghana Foundation, to sensitise players in the industry on the need to fight corruption.
Partners of the walk were Ghana Actors Guild (GAG), Film Producers Association of Ghana (FIPAG) and Union of Informal Workers Association (UNIWA).
Other groups at the walk were Upcoming Artistes Association of Ghana and the Women in Performing Arts (WIPA), among others.
The Deputy Regional Director for the National Commission on Civic Education (NCCE), Ms Mercy Ewusi, applauded MUSIGA for embarking on the walk. She advised participants to be evangelists of the anti-corruption crusade.
The MUSIGA President, Bice Osei Kuffour aka Obour, noted that as musicians, the union would continue to champion social causes, hence the decision to embark on the anti-corruption campaign.
He added that it was the union’s contribution to the ongoing national fight against the canker which did not only affect provision of services and infrastructural development but also cast a slur on the nation’s image.
The anti-corruption  walk started from the Obra Spot at Kwame Nkrumah Circle to the Hearts Park, near the Centre for National Culture or Arts Centre in Accra.
At the launch of the MUSIGA anti-corruption campaign in March, themed: “The Role of Music in the Implementation of the National Anti-Corruption Plan (NACAP)”, the Chairperson of the National Commission on Civic Education (NCCE), Ms  Josephine Nkrumah, recalled the role of music in various social campaigns in the past and described the arts as veritable tool for attitudinal change.