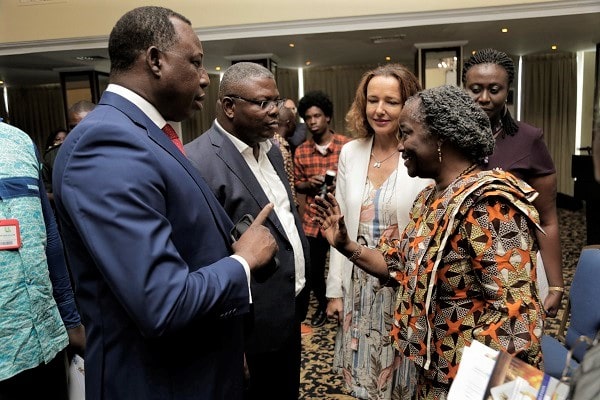 BY: Justice Agbenorsi – Graphic Online
Ghana’s Ambassador to France, Ms Anna Bossman, has urged independent state prosecuting and investigative agencies to focus more on the implementation and enforcement of anti-corruption laws to root out corruption in the country.

She said the focus on creating awareness and capacity building was not enough to win the battle against corruption, stating: “We do not enforce, neither do we sanction very often, and that normalises bad behaviour.”

Ms Bossman, a former acting Commissioner of the Commission on Human Rights and Administrative Justice (CHRAJ), was speaking at the launch of the Anti-Corruption Transparency (ACT) Week and the National Anti-Corruption Action Plan (NACAP) Conference which took place in Accra on Monday, December 2.

Delivering the keynote address, Ms Bossman emphasised the need to deepen the fight against corruption to realise the Ghana Beyond Aid agenda.

She noted  that the Ghana Beyond Aid agenda has attracted respect for Ghana on the international front, explaining: “One of the pillars of Ghana Beyond Aid is to make sure that Ghanaians have the right values. We should also show to the world that we mean what we are saying and we want certain things to be done by our own people, particularly the right way.”

“Rules and regulations can never cover every possible scenario; law enforcement is ultimately the effective way to go; not for only political leaders, but in every sphere of public office, ethical and moral standards must be developed for people as they assume public office,” she added.

The launch was organised by CHRAJ and it brought together think tanks, officials and representatives from various institutions.

The week will be commemorated with support from the Office of the President, the Economic and Organised Crime Office (EOCO), the National Commission for Civic Education (NCCE), the Ghana Police Service, the Bank of Ghana, the Financial Intelligence Centre and the Accountability, Rule of law and Anti-Corruption Programme (ARAP).

The conference will also be organised with support from the European Union, through the ARAP, and implemented by the Spanish Public Foundation (FIIAPP).

The ACT Week is a platform that seeks to create a national discussion to assess the implementation of Ghana’s anti-corruption policy, the National Anti-Corruption Action Plan (NACAP), and reinforce commitments by implementing partners for the years ahead.

The NACAP Conference, which is expected to end on December 10, 2019, will feature activities  on the topic: “Money laundering and recovery of assets”.

Ms Bossman underscored the need for the consideration of the Public Officers Bill, which was laid in Parliament in May 2015 and which, when passed into law, would help curb the menace.

“Public officers need to be guided; there is the need for clear guidelines on what a public officer should do to espouse and uphold the integrity of this country, and the Public Officers Bill has that,” she explained.

She noted that trusting public institutions and officers was very critical to democracy and the fight against corruption in the country.

“People need to be guided and this I believe will give them clear guidelines as to what public officers must and should do when they mount offices,” she stated.

The EU Ambassador, Ms Diana Acconcia, in a speech read on her behalf by Maria Luisa, indicated that Europe had the intention of becoming a greater economic actor in Ghana, hence the need for CHRAJ to ensure that Ghana was rid of corruption.

That, according to her, would create a conducive environment for foreign investment and private sector development in the country.

The Commissioner of CHRAJ, Mr Joseph Whittal, said Ghana was poised to incorporate recommendations from the conference to combat corruption in the mid-term evaluation of the NACAP in 2020.

“I am convinced that this week’s activities will be used to create massive awareness of corruption and our role in combating and preventing corruption,” he said.