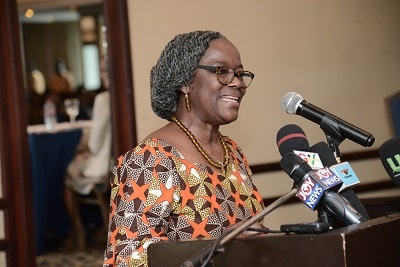 December 3, 2019  BY JONATHAN DONKOR
Former acting Commissioner of the Commission on Human Rights and Administrative Justice (CHRAJ), Ms Anna Bossman has called for strict enforcement of anti-graft laws to consolidate gains made five years after the development of the National Anti-Corruption Action Plan (NACAP).
The NACAP is a national strategy containing four main objectives and 135 activities adopted by Parliament on July 3, 2014 to fight corruption in the country over the period of 10 years (2015-2024).
According to Ms Bossman, though more anti-graft laws and measures had since been put in place, “There is much more to do. Laws are not enough in themselves to achieve the desired outcome of eradicating corruption in any society. What is needed is effective implementation and enforcement of these laws and policies”.
Ms Bossman, a lawyer, who is Ghana’s Ambassador to France, was speaking at the launch of this year’s Anti-Corruption and Transparency (ACT) week and NACAP conference held in Accra yesterday.
It had the theme; “NACAP: Mobilising national efforts and resources to combat corruption, five years on.”
Organised by CHRAJ in collaboration with various state and non-state actors, the ACT week which ends on Monday December 9, would feature a myriad of activities nationwide to examine the implementation of NACAP five years on and come up with solutions to challenges encountered for effective implementation.
Expressing concern that some people went unpunished for various corrupt activities, Ms Bossman said the implementation of laws would build public trust and see the NACAP as an effective plan.
In order to enforce the laws, Ms Bossman said the country also needed strong, independent and well-resourced institutions headed by “public spirited and strong” people to implement their mandates without fear.
To instill discipline in public officers and advance the fight against corruption, she called on the government to make the passage of the Conduct of Public Officers Bill a priority next year.
She commended CHRAJ and its stakeholders for the implementation of the NACAP and charged them to soldier on in the fight against corruption, describing it as a threat to sustainable development.
The European Union (EU) Ambassador to Ghana, Diana Acconcia in a speech read on her behalf, urged Ghana to be relentless in the corruption fight so as to create a conducive atmosphere for foreign investment, pledging that EU would continue to lend its support.
For his part, the CHRAJ Commissioner, Joseph Whitall described corruption as a notorious challenge which the NACAP had been tackling with support from diverse stakeholders.
He expressed the hope that the weeklong celebration would help stakeholders come up with strategies to fill the gaps and enable the country make giant strides in the fight against corruption.
A “NACAP Information Sheet 2019” and series of videos on corruption to be used for public education were launched at the ceremony.