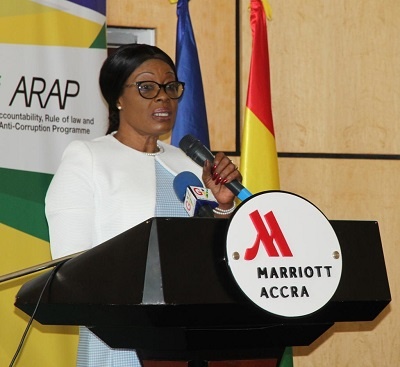 December 5, 2019  BY CLAUDE NYARKO ADAMS
Attorney General and Minister of Justice, Gloria Akuffo has urged local and international anti-corruption agencies to intensify efforts to confiscate proceeds of corruption and money laundering to deter others from engaging in such practices.
The agencies include the Commission for Human Rights and Administrative Justice (CHRAJ), Economic and Organised Crime Office (EOCO), United Nations Office on Drugs and Crime (UNODC), West Africa Network of Central Authorities and Prosecutors (WACAP) and Interpol.
According to her, allowing culprits to only serve jail time and later benefit and enjoy from their activities would send a wrong signal that crime pays.
The Minister was speaking in Accra yesterday at an international forum on asset recovery and money laundering organised by the European Union (EU) in collaboration with the Attorney General’s Department and Ministry of Justice, CHRAJ and EOCO.
“No efforts should therefore be spared in denying such convicts the enjoyment of the proceeds of their illegal conduct. To deny money launderers the enjoyment of their ill-gotten wealth, assets of persons convicted of economic offences should be traced, seized and recovered to make the conduct unattractive,” she stated.
Although asset recovery process was elaborate and challenging, Ms Akuffo said, it was the most effective and deterrent way of arresting the canker.
This, she explained, required collaboration between the government, media, general public, law enforcement agencies, judiciary, civil society groups and security and investigative bodies to enable effective collection of intelligence, tracing of assets, repatriation of assets, among other enforcement activities.
“All stakeholders must play their role in this fight in a concerted collaborative and sustained manner. That way, money laundering would be reduced significantly even if not completely eradicated. Since corruption is no respecter of boundaries, it is imperative that we strengthen the mechanisms for bilateral and multilateral cooperation to enhance our anti-corruption efforts,” she added.
Referring to the World Bank estimates, Diana Acconcia, EU Ambassador to Ghana, said, between US$20 million and US$40 billion was stolen every year through high level corruption, from developing countries and hidden overseas.
In order to combat corruption, she emphasised that nations were to take preventive measures against it, educate the populace about it, and enforce against it, laws including investigation, prosecution and application of sanctions.
Joseph Whittal, Commissioner of CHRAJ, stated that, the Commission was working with other anti-corruption state agencies to constantly review international and national best practices and innovative solutions to deal with the ever-changing phenomenon of corruption and money laundering.