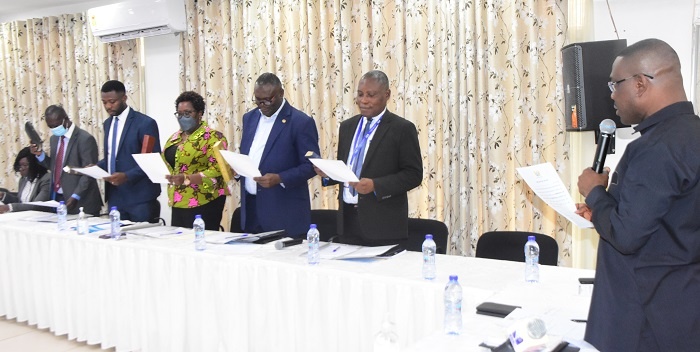 The Commission of Human Rights and Administrative Justice (CHRAJ) is advocating the inclusion of conflict of interests screening as a requirement in the appointment and assignment of public officials as part of efforts to clamp down on corruption.

Commissioner of CHRAJ, Joseph Whittal, explained that, conflict of interest screening would give public officials the opportunity to declare their interests before accepting an appointment and further indicate their readiness to step aside should it arise in the course of their work.

Although asset declaration was a befitting requirement, he said conflict of interest was a major governance issue, which if managed effectively, could nip in the bud all possible conflicting situations that public offices undertaking sensitive work were exposed to.

He was speaking in Accra yesterday during the inauguration of a six-member Audit Committee of CHRAJ by the Internal Audit Agency (IAA).

Describing it as an innovation, he said, the practice should be extended to statutory Board compositions and appointments of management members of institutions to help in the fight against corruption.

The Commissioner called for the consideration and addition of the conflict of interest screening in the Conduct of Public Officers Bill to bring about integrity in decision making and governance in public service.

On the recent Auditor-General’s report, he advised the Auditor-General to exercise the power to disallow illegal expenditure and surcharge responsible officers to deter others from engaging in corrupt practices.

He noted that the power to surcharge responsible officers was constitutional, as affirmed by the Supreme Court, and should be used to help the state recover misused public funds and promote judicious use of resources.

The CHRAJ, Mr Whittal said, was focused on meeting all regulatory requirements under the Public Financial Management Act (PFMA) and was working closely with both internal auditors and the Audit Committee to eliminate infractions which could impede its mandate to promote accountability.

He charged the various institutions to take up recommendations and advice from their audit committees to ensure the appropriate mechanisms for the use of public funds were duly followed.

He asked the Committee to support management to implement the Auditor-General’s recommendations to protect CHRAJ from being cited for infractions.

Despite reductions in financial irregularities, Dr Osae said, the quantum of funds quoted in infractions had increased, hence the need to empower internal auditors and audit committees to work.

On his part, Mr Yankey called for support from the management of the Commission to enable the Committee work to make CHRAJ an enviable institution in terms of public financial management.