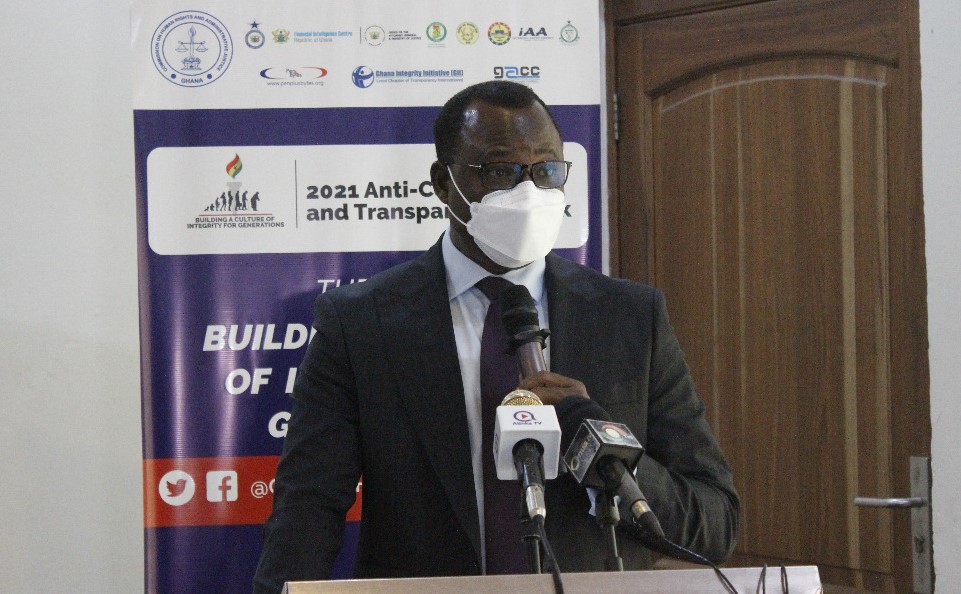 Corruption fight is dependent on commitment and willingness

Contrary to claims by the Special Prosecutor that his office is handicapped because of inadequate budgetary allocation, Commissioner of the Commission on Human Rights and Administrative Justice (CHRAJ), Joseph Whittal, says the fight against corruption is not dependant on a heavy financial muscle alone.

“It is not the money alone that can fight corruption. You cannot expect to start work with a bank,” he said.

According to the CHRAJ boss, fighting corruption does not begin with money and has thus entreated Mr Kissi Agyebeng to make do with what he has.

“The fight against corruption must begin from somewhere and not necessarily with money,” Mr Whittal told Citi News at the second edition of the Ghana Integrity Initiative Awards held in Accra on December 9, 2021.

Mr Kissi Agyebeng speaking to the press on the celebration of International Anti-Corruption Day noted that his office could not function efficiently without adequate financial commitment.

“Without money, we can’t do anything. We will be reduced to writing long letters without any force because we need money for everything, especially our operations. And the question as to whether what was allotted to the OSP is sufficient, I will say generally in Ghana nothing is sufficient,” the Special Prosecutor said.

Some GHC65,000,000 of the budget is to be used for the salary compensation of workers at the OSP.

The total amount allocated to the OSP by the government for the upcoming year, represent just 6.6% of the GHC1.2 billion requested.

The OSP in 2019 received a budgetary allocation of GHC180 million.

Some anti-corruption campaigners have complained about the adequacy of funding for the OSP in the 2022 budget.

But according to Joseph Whittal, Mr Agyebeng has enough at his disposal to execute his mandate.

He said, “if you start with a ten-storey building as the OSP has got now, and you’re given GH¢40 million to start, [just] start”.

“The OSP should start, and more will be added. You cannot expect to start with a bank. Every institution started gradually and made it,” he added.

Mr Whittal believes that the fight against corruption is heavily dependent on the commitment and willingness on the part of persons mandated to do so.