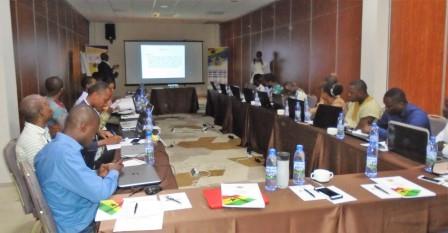 By Samuel Akumatey, GNA
Ho, Feb. 26, GNA
Mr Charles Ayamdoo, Director of Anti-Corruption at the Commission on Human Rights and Administrative Justice (CHRAJ) has called on Metropolitan, Municipal and District Assemblies to lead the anti-corruption campaign.
He asked them to use roles and objectives outlined in the ten-year   National Anti-Corruption Action Plan (NACAP), which includes the use of community outreaches, and public forums such as town hall meetings to drive the campaign.
Mr Ayamdoo made the call at a day’s capacity building workshop for Municipal and District National Anti-Corruption Action Plan (NACAP) focal persons in the Volta Region.
The Director asked MMDAs to among others prepare financial statements and audit reports on time, and institute special awards at the local level to recognise honesty and integrity among members of society.
He said it was of equal importance to enforce rules and educate public officials against conflicts of interests, and enforce the implementation of financial management laws and regulation, all towards fighting corruption.
My Ayamdoo said a private public partnership, which includes government, individuals, civil society groups, the private sector and the media also ought to contextualise and mobilise efforts and resources towards the fight.
The Anti-Corruption Campaigner said it was necessary to paint corruption as a high risk, low gain activity, and discourage its practice across all spheres of society.
Mr Ayamdoo called for the development of policies against sexual harassment, absenteeism, and “moonlighting” at workplaces, which were becoming the order of the day.
The workshop, funded by the Accountability, Rule of Law and Anti-Corruption Programme (ARAP), sensitised focal persons on utilising the National Anti-Corruption Reporting Dashboard (NaCoRD), developed by CHRAJ to facilitate corruption reporting.
The digital platform reduces paperwork, and saves time.