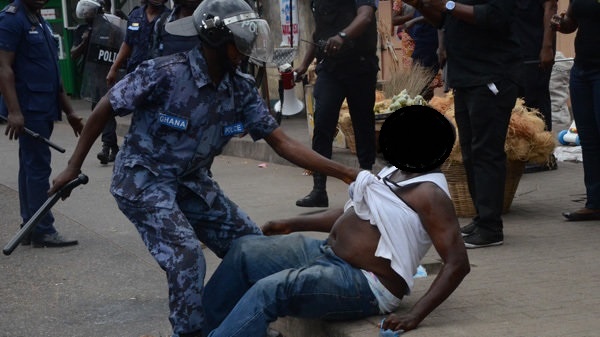 March 15, 2019
PRESS STATEMENT – POLICE BRUTALITY
The Commission on Human Rights and Administrative Justice (CHRAJ) has received with great exasperation information on assault on three Ghanaian Times Journalists by police officers in Accra and vehemently condemns the act.
Two of the mandates of the Commission include the promotion and protection of the fundamental human rights of all persons living in Ghana as well as ensure fair administration of all public services including the Police Service in the delivery of service by these public institutions and public officials.  It is from this perspective that the Commission views the abhorrent assault on these journalists by police officers who were expected to protect them but who rather with impunity turned around to assault them as an exhibition of clear unprofessionalism and unbridled impunity which must be checked.
The Journalists were reported to have been travelling in their official vehicle to their various assigned venues when they decided to film an accident involving a police officer riding an unregistered motorcycle and the vehicle in which they were travelling at Kinbu in Accra Central.
Ten police officers, who were unhappy about the filming and ensuing exchanges between the journalists’ driver and the police motor rider, and in attempt to cease the recording device, pounced on the journalists and assaulted them.
One of the Journalists, a lactating mother who had her baby through a caesarean section, was hit in the lower abdomen, collapsed, and was rushed to the emergency Unit of the Ridge Hospital while the others were again manhandled by the police.
In fact, these actions involving the use of excessive and unreasonable force by the police is clear evidence of human rights violation which Article 15 (1) and (2) of the 1992 Constitution abhors.
Ghana’s human Rights Commission, CHRAJ, has had occasion to caution the Ghana Police Service over and over again to exercise restraint or to be judicious when handling human beings but to no avail.
In this regard, the Commission calls on the Inspector General of Police to conduct thorough investigations into this matter, and on the basis of the findings, crack the whip and deal with the perpetrators of this heinous crime in accordance with the law.
The Commission recommends prosecution of these errant police officers in a court of competent jurisdiction and not to put them through administrative Service disciplinary enquiry to serve as deterrent to others and to reassure Ghanaians that police officers are not above the law.
The Commission wishes to remind the IGP and the Police Service over which he superintends that the timing of this assault by his men on innocent citizens coming on the heels of the clear unprofessional conduct exhibited by police officers in their testimonies before the Emile Short Commission Hearings into the Ayawaso West Wougon shooting incidents televised live and viewed by all Ghanaians nationwide is most disappointing and not reassuring of the professionalism of the Service and any lessons learnt.
The Commission further recommends that the victims should also be compensated for the injuries, trauma and losses suffered.
The CHRAJ urges the general public to report incidences of police brutality whenever they occur, and also calls on Civil Society Organisations, religious bodies, and other relevant institutions to come out and condemn this barbaric act in no uncertain terms.
The Commission however, encourages and appeals to the citizenry to be law abiding as they enjoy their rights and freedoms with caution, ensuring that they operate within the structures of the law.