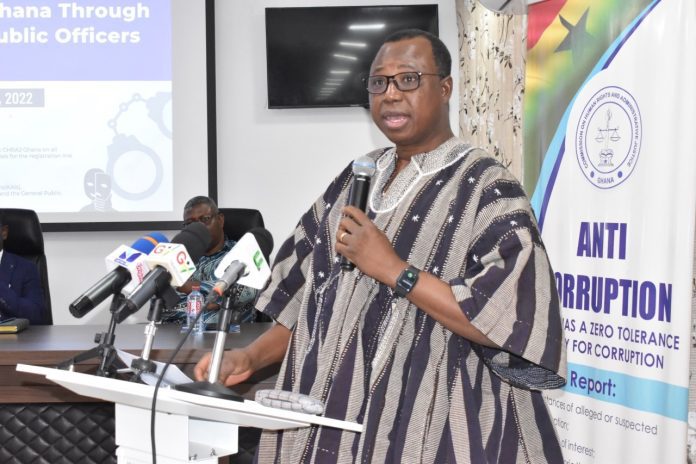 The Commission on Human Rights and Administrative Justice (CHRAJ) has called on stakeholders to form a broad coalition to advocate a speedy passage of the Bill.

“Efforts to give practical effect to Chapter 24 of the 1992 Constitution which focuses on the Code of Conduct for Public Officers has resulted in the introduction of the Conduct of Public Officers Bill (CoPO Bill).

“This Bill has been laid in Parliament three times between 2008 and 2020 without being enacted into law, and which is presently pending before Cabinet for consideration. This is quite troubling,” Mr. Joseph Whittal, CHRAJ Commission has stated.

He stressed, “We fear that if action is not taken, the Code of Conduct for Public Officers (CoPO) Bill might suffer the same challenges that the Right to Information Bill faced before it was passed into law. This situation is not desirable”.

Mr Whittal was speaking at a symposium to mark International Anti-Corruption Day celebrations in Ghana organized by CHRAJ and stressed that Ghana needs robust Conduct of Public Officers Law that can effectively curb corruption.

The 2022 International Anti-Corruption Day (IACD) seeks to highlight the crucial link between anti-corruption and peace, security, and development.

Speaking on the local theme: “Curbing Corruption in Ghana through a robust Conduct of Public Officers Law,” Mr. Whittal called for total support from all partners to create awareness of the provisions of the CoPO Bill as a means of addressing corruption in general and conflict of interest issues.

He said the bill when passed would also address the illegal acquisition of wealth and illicit enrichment in particular, “we call on State institutions, Private, and Civil Society to join CHRAJ to facilitate the speedy passage of the CoPO Bill into Law”.

The CHRAJ Commissioner noted, “no one can deny the importance of a code of conduct for public officers in the fight against corruption, indeed, allegations of non-compliance with Chapter 24 of the Constitution especially conflict of interest and non-declaration of assets and liabilities continue to bedevil the media space”.

He said this year alone, the Commission received a record number of cases bordering on non-compliance and contravention of Chapter 24 of the Constitution and is investigating.

Mr. Whittal said, “we hope that the 2022 Anti-Corruption Day would make critical contributions to the national effort at tackling issues of corruption and provide the country an opportunity to do a soul searching into public sector integrity and consolidate the gains made in reducing corruption in Ghana”.