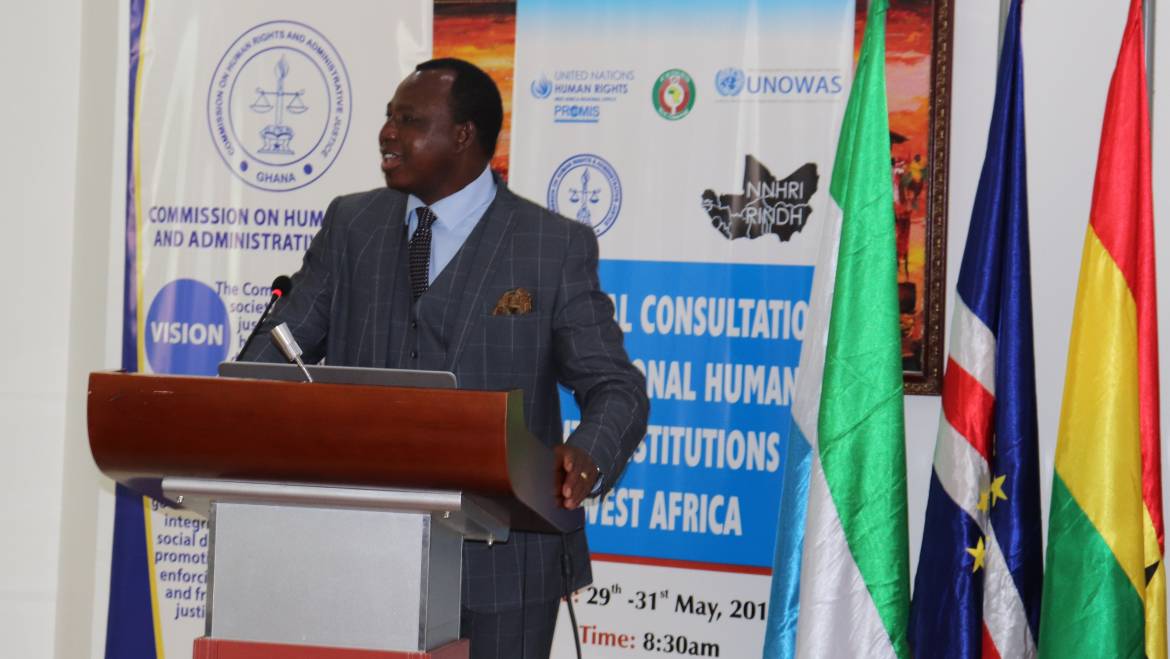 The meeting is for the 15 NHRIs to engage on topical social issues such as their roles in the attainment of the Sustainable Development Goals (SDGs) and the promotion and protection of the human rights of migrants.
The promotion of peace, security and human rights, generally of citizens of the Economic Community of West African States (ECOWAS), with a gender perspective, and other topics will engage the attention of the participants during the two days.
Fifteen out of the 16 ECOWAS countries have NHRIs, with Ghana, Liberia, Niger, Nigeria, Togo and Mauritania being recognised as compliant with the Paris Principles.
These countries, therefore, hold an “A” status, conferred by the Global Alliance of National Human Rights Institutions (GANHRI).
In February 2019, The Gambia established a national human rights commission.
The Paris Principles are a set of standards for the functioning of NHRIs that were defined at an international workshop in Paris in October 1991 and adopted by the UN in 1993.
The consultative meeting is being organised with the support of the Office of the United Nations High Commissioner for Human Rights (OHCHR), the United Nations Office for West Africa and the Sahel (UNOWAS), ECOWAS and the Network of NHRIs in West Africa.
Right time
In an interview, the Commissioner of the Commission on Human Rights and Administrative Justice (CHRAJ), Mr Joseph Whittal, told the Daily Graphic that the meeting was happening at the right time because NHRIs were best placed in the realisation of the SDGs.
“A human rights-based approach to the realisation of the SDGs is missing on duty bearers,” he said.
He said the two-day meeting would, therefore, provide an opportunity for the human rights institutions to engage government institutions and agencies in the sub-region, so that they did not see the realisation of the SDGs as any normal development paradigm.
Approach
Mr Whittal explained that the human rights-based approach to the realisation of the SDGs required an appreciation of human rights issues in development.
According to him, that was necessary to ensure that the gaps in the enjoyment of all rights were factored into the development data gathered for any effort.
He said to achieve that, institutions such as the Ghana Statistical Service (GSS) had to frame their enquiry in any information gathering exercise to include the human rights implications in all development efforts.
He disclosed that CHRAJ was already engaging the GSS and the National Development Planning Commission (NDPC) on that.
Besides the GSS and the NDPC, Mr Whittal said, other institutions engaged in development data management in the country had been invited for the consultative meetings.
Promotion
On the promotion and protection of the human rights of migrants, he said the NHRIs had been given the impetus to ensure the human rights of migrants and participate in negotiations for a Global Compact on safe, orderly and regular migration (GCM).
“The regional consultation is, therefore, an opportunity for NHRIs to define strategies and specific actions to contribute to the implementation, monitoring and review of the GCM at the national level, in line with the gender-responsive and human rights-based approach,” he said.
Mr Whittal said in the promotion of peace, security and the human rights generally of citizens of ECOWAS, with a gender perspective, NHRIs were viable stakeholders in initiatives aimed at promoting peace and security in the West Africa and the Sahel regions.
Background
Over the past decades in West Africa and the Sahel, NHRIs have contributed to and participated in various aspects of the work of UN human rights treaty bodies.
In spite of the encouraging progress, many NHRIs in the region continue to face challenges regarding their functioning and independence.
Writer’s E-mail: caroline.boateng@graphic.com.gh