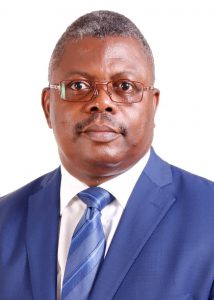 Mr. Quayson joined the Commission as Senior Legal Officer in 1993, having worked as Legal Officer of the predecessor institution of CHRAJ, the Office of the Ombudsman, from 1987 to 1993. Prior to his appointment as Deputy Commissioner, he was Regional Director for Western and Central Regions.

Mr. Quayson chaired the National Working Group that developed Ghana’s National Anti-Corruption Action Plan (NACAP) and is the Member of the Commission with oversight for its implementation. He is the Vice Chairman of the High Level Implementation Committee (HiLIC) and Chair of the Monitoring and Evaluation Committee (Monicom) of the NACAP. He also chairs the National Working Group responsible for the Review of Ghana’s Implementation of the United Nations Convention against Corruption (UNCAC).

Mr Quayson is a lawyer by training, called to the Ghana Bar in 1987. His expertise is in human rights promotion and protection, administrative justice and corruption prevention and investigations. He is married and father of two children.